SADD's mission:
To provide students with the best prevention tools possible to deal with the issues of underage drinking, other drug use, risky and impaired driving, and other destructive decisions.
(Read more about SADD's mission HERE.)
Kingsford High School's SADD Chapter is an inclusive group of students who wish to encourage positive decision making among young people. SADD members participate in several awareness programs and community service projects throughout the school year. Students who wish to have a positive impact on their school and community should consider joining SADD.

Fundraiser to Benefit Alyssa Forstrom: What it Really Means to be a Flivver 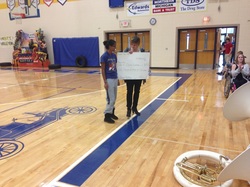 During Rivalry Spirit Week at Kingsford High School, students showed their true school colors and the real meaning of Flivver Pride when they joined together to raise money to help a fellow Flivver in need. The KHS SADD Club and Student Council asked the student body for help in raising funds to defer some of the medical costs for Alyssa Formstrom, an eighth grader at KMS, who has Spina Bifida. When Marcus Andrews, a senior and Varsity football player, heard about Alyssa's numerous pending surgeries, he asked SADD to pose a challenge to his fellow classmates. Marcus agreed to allow Coach Hofer to cut off his long locks if the student body could raise $300 to help Alyssa. Students donated money through their participation in the 'Pie in Your Eye" pumpkin guessing game. Each guess cost $1 and winners threw pies in the faces of their administrators at the pep rally. Between the pumpkin guessing game and in-kind donations from students and staff, KHS raised over $1000 to help Alyssa Forstrom! Alyssa's father addressed the students at the pep rally. He told the students that if they perform and play with the same heart that they showed Alyssa, they simply cannot lose. He was right. Flivver Pride runs deep. What a great week in Flivver Country! 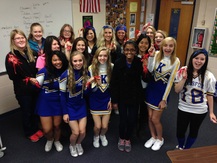 SADD Participates in Relay for Life 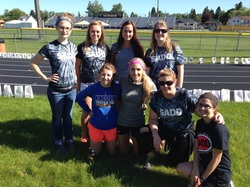 Several SADD members gathered on June 13, a week after school released for Summer Break, to walk in honor of those affected by cancer, particularly those who have lost their lives due to alcohol and other drug related cancers. What an amazing way to spend a beautiful late Spring day!

With the generous support of the KHS faculty, staff, and student body, the KHS SADD members raised $844 to benefit the American Cancer Society's Relay For Life. During the week of May 12, 2014, SADD students organized a variety of activities to raise funds for Relay for Life including: Teacher Dress Down Days, Hat Day, Bake Sale, and Delay the Day. The KHS SADD Club set a fundraising goal of $250, so SADD members are overwhelmed with gratitude to all who have helped them triple their goal. Please consider joining the KHS SADD Club at 4:00 on June 13 at Iron Mountain Stadium as we walk to honor those affected by cancer, particularly those who have lost their lives or who are fighting for their lives due to alcohol and other drug related cancers. Pictured here is SADD advisor, Kendalynn Sutton, offering the Relay for Life Student Representative (and soon-to-be KHS grad), Marinda Bottesi, the donation to the American Cancer Society.

On December 13, the KHS SADD Club (Students Against Destructive Decisions) continued a tradition of donating blankets to The Caring House. This year, in addition to blankets, SADD donated slipper socks, mini soaps and lotions, and day passes to the Northern Lights YMCA. The KHS SADD Club would like to thank the YMCA for offering the day passes for The Caring House residents.

The Students Against Destructive Decisions (SADD) club has identified that self-harm is a growing problem in the Kingsford community, just as it is throughout the country. In an attempt to build a safer, more open school climate in which students who are suffering from issues that lead to self-harm can receive the assistance they need, the SADD club held an open meeting on Wednesday January 22, in Room 100 to open a dialogue between students of various school affiliations about this topic. Three counselors were present at this meeting. These students received training in identifying signs of self-harm and learned the steps to take to prevent someone from taking his or her own life.